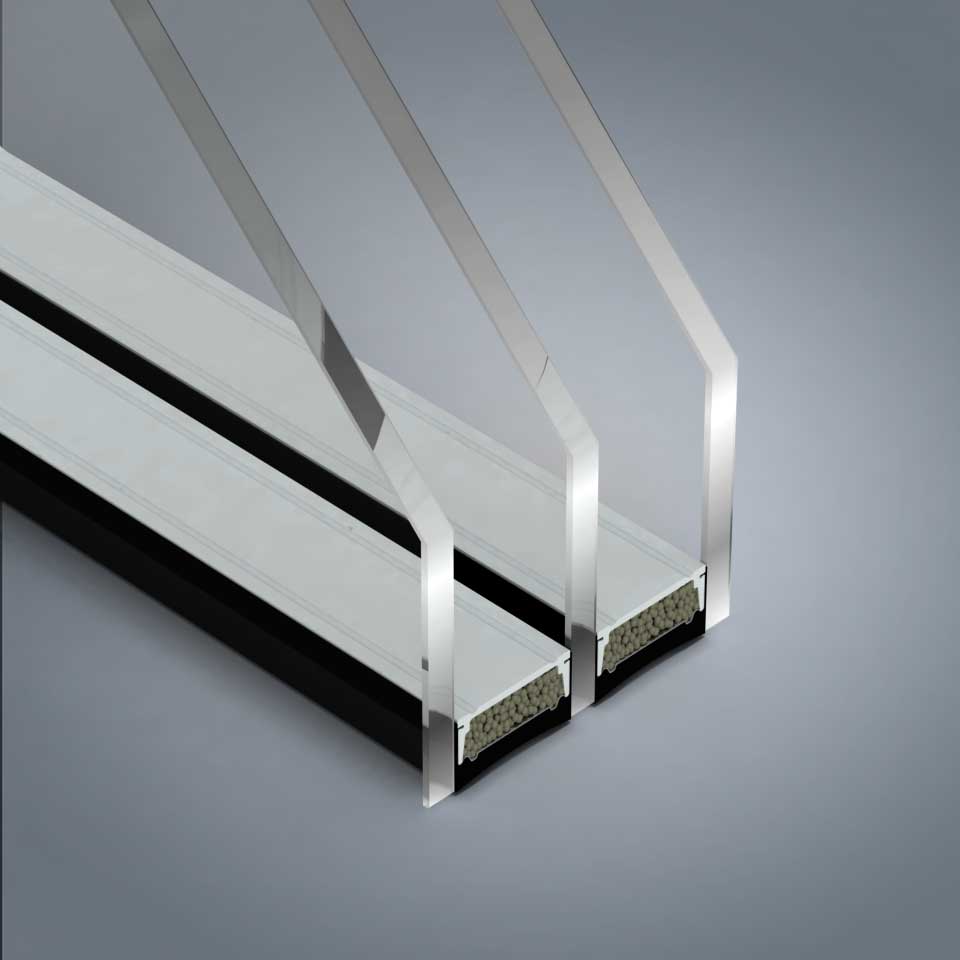 The task of the glass, as the main component of the window, is primarily to let the daylight inside, and at the same time protect the room from the cold. The functionality of this element depends on its parameters, especially thermal insulation and solar energy permeability. A product that guarantees low energy loss and the right amount of light in the interior is the two-chamber SUPERtermo   0.5 glass.

The SUPERtermo 0.5 thermal insulation cartridge consists of three panes of glass, each of which is 4 mm wide. Between the individual panes there are argon-filled spaces with a width of 18 mm. The extreme glass panes, from the inside, are covered with the new ClimaGuard low-carbon coating® Premium2. It allows solar radiation (in the form of short waves) to enter the room. At the same time, it reflects infrared (long-term) radiation emitted m.in. heating equipment and people, thus limiting the heat from the interior to the outside. The SUPERtermo two-chamber glass has the following coefficients:

The glass panes are separated by a spacer frame. For the THREE-PANE SUPERtermo 0.5 thermal insulation cartridge, you can choose from three types of frames available in MS more than WINDOWS:

The standard version (MS heat frame) is characterized by much better thermal insulation in contrast to the once commonly used aluminum frames. The fully plastic THERMOBAR frame, on the other hand, provides the most favourable heat transfer coefficient of the window. The undoubted advantage of the Chromatech Ultra frame is the possibility of choosing a color version.

Fine gas and thermal insulation of a three-tube cartridge

The thermal insulation properties of the SUPERtermo glass are due m.in. from the filling of inter-high-speed spaces with argon, i.e. a noble gas with less thermal conductivity compared to air. Its use guarantees the reduction of heat loss. This is due to the fact that the presence of argon in the intersolicular chamber is associated with the slow movement of gas molecules between the panes of glass. Therefore, the use of argon reduces convection – transfer of heat from the warm center to the cold (from the inner to the outer glass). The larger the width of the frame (i.e. the greater the distance between the individual glass panes), the better the insulation properties of the glazing package. However, it should be borne in mind that the space between the windows must not be too large. The optimum distance between glass panes is from 16 to 18 mm. Increasing this parameter has a negative effect on thermal insulation. It results in the free circulation of gas – increases convection.

Factors affecting the thermal insulation of the SUPERtermo glass

The use of a low-carbon coating also has a positive impact on the thermal insulation of the SUPERtermo glass. It allows the penetration of short-wave solar radiation into the interior, while reflecting long-term infrared radiation (heat). Beneficial properties are also achieved by using three glazing instead of two. The free space between the glass panes is a barrier against heat loss through conduction. The use of three shafts, i.e. obtaining two chambers instead of one, further reduces energy loss due to conduction.

The three-speed SUPERtermo 0.5 cartridge has a light transmitting ness Lt = 74%. According to PN-EN 410:2011, this parameter is denoted as τV. It determines how much visible sunlight enters the room. The high value of the coefficient indicates that thanks to the glass the interior is well lit. The 74% light transmittance and 53% solar permeability is primarily due to the use of the new ClimaGuard low-emission coating® Premium2.