Find out what technologies are used for greater rigidity of large size windows. 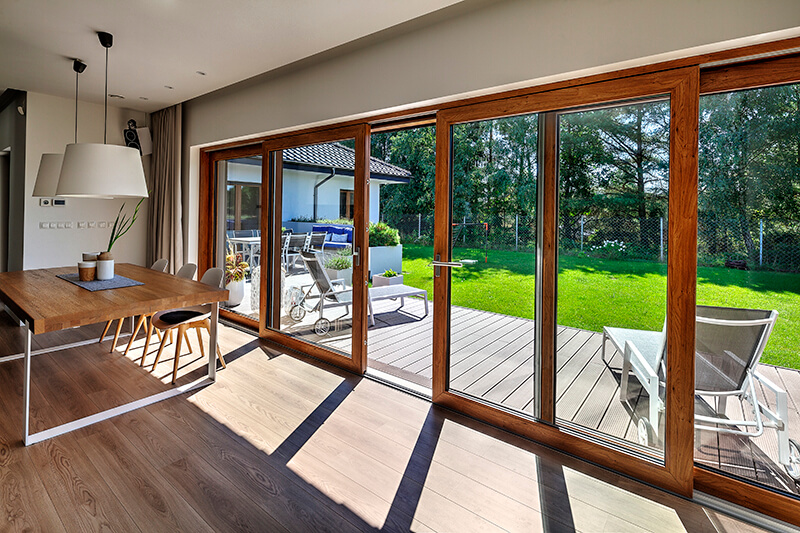 Large windows are one of the current trends in construction. Our homes are opening up to the world, which poses a challenge for PVC profile systems. In order to provide the structure with the right strength, it is necessary to increase the rigidity of the window elements. This is achieved using, among other things, special glass bonding technology and additional reinforcements.

What calculations are made when designing windows?

One of the necessary actions carried out during the design of windows is making static calculations. The calculation takes into account the size of the window and where it will be installed. In addition, the surroundings of the building are an important consideration, as is the terrain on which it is located. The calculations are performed in accordance with EN 1991-1-4, a document that defines region-specific parameters. Taking all the elements into account allows the calculation of the static loads which may act in a plane perpendicular to the structure. Additional calculations are needed if the window is divided by horizontal elements (transoms) or if two separate windows are used in the construction (stacked on top of each other). In such a situation, static calculations must be made for elements carrying linear or point loads acting in the plane of the window. This allows the selection of appropriate materials and solutions to be used in the production process of a window. This will ensure that the structure has adequate stiffness and can carry the loads calculated. These steps allow to create large windows without worrying about their strength.

What does the load capacity of a window depend on?

Large windows – how is the strength of the profiles increased?

Large windows require the sash profile to be more robust. In this case, additional reinforcements in the form of flat bars are used. These elements are mounted in the glazing chamber. The screws create a mechanical connection between the flat bars and the sash reinforcement. This solution is also sometimes used in mullions (on one or both sides) and in connected window frames. Importantly, the improved stiffness does not go hand in hand with a disruption to the aesthetics of the structure. However, it adversely affects the thermal performance of the window. This problem has been eliminated thanks to the technology of bonding glass into the sash profile developed by specialists. It gives large windows in the living room or bedroom both an attractive appearance and good thermal insulation.

The glazed units are bonded into the sash profile in order to obtain a mechanical connection of the glazed unit with the sash profile along its entire circumference. The glazed unit is an arrangement of several panes of glass separated by spacer bars. An external sealant is used to mechanically bond the panes together. In this way, an element with certain parameters is formed. The mechanical connection of the glazed unit and the sash ensures high rigidity of the construction. In addition, in this case the loads from the forces resulting from the weight of the sash and the glass are evenly distributed. As they are not concentrated on the supporting diagonal of the sash, many undesirable phenomena can be avoided. These include profile deformation, sash sagging effect and glass breakage near load-bearing spacer blocks. This solution therefore ensures that large windows will not lose their properties over time. It is also worth noting that bonding protects the glazed unit from being pushed out. This is an additional way to secure the structure against burglary.

It may happen that the dimensions of the window allow it to be made in one frame and all possibilities of increasing the stiffness of the structure have been used, but the desired parameters are still not achieved. In this case, in the transoms or mullions, static profiles which are permanently connected to the reinforced element are used. Besides, both ends of the static profile are fixed to the building wall. In this way, it acts as an additional column that transfers the load from the window to the building wall and allows for thermal movement of the structure. Static profiles can be installed on the external or internal side of the window, depending on the circumstances.

What are static connectors used for?

If the dimensions of the window do not allow it to be made in one frame, it is split into several windows in separate frames. They are then connected together using static connectors. Typically, these are elements in the form of a flat bar, which have a shaped head that extends beyond the frame profile. This section is covered with a cap in the colour of the window. One variation of a static connector is an expansion connector. It is used in the cascade connection of structures. It allows thermal movement of the structure in the plane of the window, as well as providing greater rigidity of the window frame connection. Like static profiles, static and expansion connectors must be mechanically connected to the wall of the building.

In MS beyond WINDOWS not only the possibilities of profile systems and modern technologies are used, but also solutions created by specialists from the technological department. Engineers have developed a new shape for the reinforcement used in the narrowest sash of the bluEvolution 73 system. Thanks to it, as well as the previously presented methods, extremely slim SliM windows were created. In the MSline+ system, on the other hand, a patented laser-welded closed frame reinforcement has been introduced. This made it possible to achieve greater rigidity of the frame and stability of the connection between the window and the wall (support of anchoring elements on two walls of the steel reinforcement). In addition, this solution provides a solid base for the security striker plates. This increases the burglary resistance of the window. It is worth bearing in mind that the stability of the frame has a positive effect on the stability of the sash.